When I was thirteen, my mom and I were in a homeless shelter because her and her boyfriend had broken up.  I felt lost and alone.  I had attended a brand new school where I had no friends.  All of this occurred only months after my older sister was put into foster care.  And now I was on a strict schedule, which included:  an eight o’clock curfew, scheduled meals and a mandatory church service.

I remember there being one service in particular that really spoke to my heart.  After the service I was determined to meet the guest speaker.  It seemed like he understood my situation and was speaking directly to me.  He said his name was Keith Farmer.  After chatting with him for a while, he told me about a program on Saturday nights.  He said it was a place kids could get away and learn about God.  To be honest, I was excited to get away but not very enthusiastic about learning about God.

At my very first time at Straight Street I made a lot of friends.  There were a few of them that lived at the Mission with me.  I began to truly enjoy learning about God.  It was comforting to know that I had a place to go, where I wouldn’t be judged.  After a few months of going my mom decided we would move in with her new boyfriend.  I was no longer able to attend Straight Street.

Some years later, at age 17, I was working at Kroger to prepare for the birth of my son.  One night when I got off work, I realized that my mom was not in the parking lot waiting on me.  When I called to ask her where she was, she told me she wasn’t coming and hung up on me.  I was stranded with nothing to my name.  My manager called the police to intervene and see if there was anything that could be done about my situation.  Unfortunately there was no solution to be found.   I was only months away from turning eighteen.  They also informed me that I was legally emancipated due to my pregnancy.  The only person I could think to call was Keith Farmer.

He showed up at eleven o’clock at night to get me.  He took me to the Mission and put up a fight to convince them to bend their rules and allow me to stay.  This is normally disallowed if you’re a minor but they accepted me.  I was grateful that he would do all this for me despite the fact he hadn’t seen me in years.  Traci took me the very next day to get clothes and blankets since all I had was my work uniform.  I felt disappointed that I was unable to buy my own clothes.  However, I was extremely appreciative of the things she got me and how nicely she treated me.  Keith Farmer also provided me bus passes so I could continue to working at Kroger.  While we talked that night, he reminded me that no matter how difficult things became or how many mistakes I make, God still loves me.

He also invited me to attend TeenMOPS (Mothers of Preschoolers).  He told me how they informed you on nutrition for your baby and provided necessities.  He told me how there would be a bible study and praise for God.  I was very excited about the things that TeenMOPS offered.  I was eager to start my journey on the right path towards God.  I began to attend TeenMOPS and just like Straight Street I loved it from the first night.   I began to feel closer to God.  On February 28th only a few months after my first night in the Mission, I achieved getting my own place.  It was a quaint two bedroom apartment but that was more than enough room for me and my son.  When Straight Street and TeenMOPS found out about my success of obtaining my own place, they offered to help me furnish it.  The supplied me with furniture which they also assisted in setting up for me.

On March 8th 2009, my beautiful baby boy, Taven, was born.  All the TeenMOPS and volunteers came to support and congratulate us.  It meant a lot to me to see them all there and to know that Taven has so many people that love him. 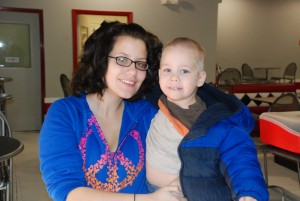 In June 2009 I got my first car.  This became my new transportation to and from work.  With a new baby, bills and childcare fees it was hard to make ends meet.  Even then Straight Street was able to help me.  They provided me with gas vouchers to help me get back and forth from work.  Keith, Dawn, Jonathan and Traci gave me so much to be thankful for.  From helping me off the streets when I was younger to being there anytime I needed anything at all.  Also for never giving up on me, even when I strayed away they have always been the light leading me towards God.  They have been a true example of God’s love.  Without them I would not be where I am today!  I get closer to God every day, although I could never be as close as I would like.

I still attend Teen MOPS.  I no longer need supplies or vouchers but I still enjoy going for the service and for the opportunity to see all my friends I’ve made all those years ago.  I enjoy the chance to see their little ones and for my children to receive that positive interaction.

As for me now?  I still live in the same place, although I have a new car.  I work full-time as a CNA in a health and rehabilitation facility.  In January, I will begin taking courses to be a LPN.  I now have two handsome boys that God blessed me with, and that I can provide for.  One day I hope to be able to make a difference in someone’s life like the difference Straight Street and TeenMOPS has made for me.